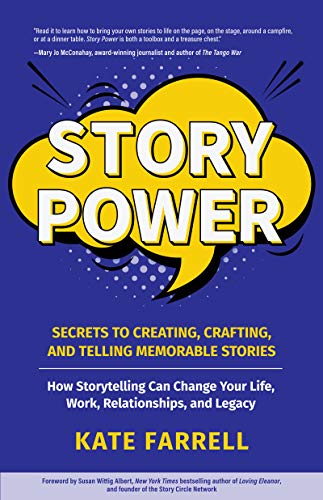 Even a brief visit to a good-sized bookstore will reveal row upon row of writing books. Not the blank books, waiting for your thoughts (although there are lots of those, too.) The books about how to write, and what to write and when to write—it seems like anyone with a published book or an MFA needs to share their secrets to help you, too, write your story.

So what is the appeal of “Story Power” by Kate Farrell? Is this just another “write what you know” lecture?

Farrell’s approach is focused primarily on memoir, the writing of one’s own story. Rather than an airy wave towards the “share your truth” school, Farrell believes in setting out the steps, exploring, analyzing and taking notes. Put in the work, one can imagine her saying, and you will be rewarded.

In the first chapters, she takes broad themes, such as “Childhood & Coming of Age.” After a brief introduction with fairly standard advice—purge yourself of distractions, find a place to write—she gets down to business: ruminate on your childhood, find a bit of the past and let it into your mind. If it won’t come willingly, drag it, shape it, find it in tiny bits of memory that you may not realize you remember.

Summon the smells, the sounds, the feelings. Pile up these bits and pieces in your notebook until larger pictures form. Farrell provides useful (and some not-so-useful) questions to help revive the memory until it is a scene. Once a scene is created, one must judge whether the scene can be a story.

She gives us examples. A memory of crabbing with her brother, bringing the catch home, watching her mother cook the crabs is a sweet, evocative and warm scene. But, Farrell admonishes, it isn’t a story. There’s not enough action and no conflict. In contrast, she offers a tale of sneaking into the garden of a seemingly abandoned house, exploring the garden and almost being caught by an angry caretaker. It isn’t “Moby Dick” but the piece has all the elements of a story.

How did a scene become a story? Under the heading “Crafting,” Farrell explains. Then, to share her process, she strips down her story to the barest outline. 1. Setting; 2. Characters; 3. First scene; 4. Second Scene, rising action… And so forth.

Then, it’s your turn. Farrell provides a generous supply of prompts and exercises to begin your own collection of scenes and stories.

The parts most people will flip to are “Exercises and Prompts.” The prompts are, again, not a blithe “Today I found the most wonderful….” sort. Rather, they are the nuts and bolts: create a timeline. Find the action. Detail the characters. Trace the climax. On first reading, this strict array of examples and rules caught me short. Wasn’t this a bit, well, old-fashioned?

Yet, as I continued to read, the sheer good sense of the method struck me. Every writer has faced the blank page, the unblinking screen, or even the implacable voice recorder, wondering how to start. Farrell starts from that point. This is how the words come out—first, as disconnected images and sensations, tied into scenes, then woven into stories. She uses her own work to demonstrate both success and failure, or at least, not quite success.

If you resist the concept of outlining as akin to performing dentistry on yourself, Farrell lets you explore other paths to writing. She opens up the book to other writers, providing a view to their process. KJ Landis tells of writing as a means of creating a one woman show. Waights Taylor Jr. uncovering the bigoted stranger who was his father. Joan Gelfand speaking of “novel fever.” So many different writers, different styles, different voices sharing their methods of producing a story. As a bonus, Farrell has a chapter on how to tell a story orally. How to break it down, find the rhythm, converse with your audience or present more formally.

There is a selection of tools in the back, that, frankly, I found unnecessary. A blank story board, “mind map,” or empty outline seemed more like filler. With the wealth of stories, prompts, and examples provided, why have a page of six grey boxes captioned “Story Board?” But that is a nitpick.

“Story Power” is one of those books which will become dog-eared and messy, studded with paper slips, crammed into the laptop bag or the back pocket. It is a book to get you writing. If you never read more than the first three chapters, you will be writing.

If you get to the end, you may just be inspired.