An Interview with Dani Alpert, Author of The Girlfriend Mom 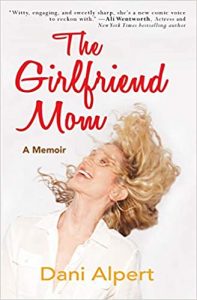 Dani Alpert calls herself an accidental writer. “Sure, I wrote overwrought and melodramatic poems in high school, but I never wanted to be a writer,” says the award-winning author of The Girlfriend Mom.

Dani grew up in an average, sleepy suburban town in Westchester County, New York, and says she was a musical theater nerd who jazz-walked in many a musical. She went to the film school at New York University, then moved to Los Angeles, where she attended The American Film Institute as a producing fellow and spent the next sixteen years working in entertainment.

“I always wanted to be famous; I just didn’t know how it would happen, so I tried everything. A bit unfocused in my singular drive, I suppose,” says Dani. It wasn’t until a friend recommended her for a writing gig that the thought of being a writer entered her mind. “I had no real experience, and I never thought that I’d get hired, so I was very relaxed, feeling like I had nothing to lose,” she recalls. “I think the actress who hired me liked my boots (not kidding). That job set me on my writing journey—movies and television, stand-up, and one-person stage shows.”

The Girlfriend Mom is about Dani’s relationship with a divorced dad and how she, who was intentionally child-free and never wanted kids, bonded with his two children and came to love and want them in her life forever. She says she was in an avalanche of hurt when she was dumped by the man for another woman, and that writing the book was a way for her to process the loss and take back the control she had lost in that relationship.

“I wrote a proposal, got an agent, parted with that agent, and when I couldn’t find another agent, I said, ‘Fuck it! I’m writing the book.’ I couldn’t sit around and wait for ‘the call.’ It was too frustrating. I started writing the book on February 15, 2015, and it was published May 5, 2020,” Dani says, adding that for the first two and a half years, it wasn’t her day job. “Only when I quit my day job as a body professional (Pilates instructor), did I have the luxury to write full-time.”

Dani says she was genuinely surprised and humbled by the recognition that the book has received, even sweeter because she went into the project with zero expectations. “I wanted to write this book because I thought it was funny and entertaining, and really that’s all I ever wanted to do—to entertain.” Her book was a finalist in three literary competitions: the 2020 Foreword Indies, the Independent Author Network Book of The Year, and the Wishing Shelf Red Ribbon Awards. “And I’m not just saying this because this interview is for Story Circle Network, but winning the 2020 Gilda Award in honor of the comedian Gilda Radner takes the cake. The Gilda Award, and the personal note that I received from the Norman Lear after he read an essay I wrote about him, are all the validation I need.”

The author considers anyone who listened to her complaints, neuroses, or read a draft portion of her book as a mentor. She says she tried to follow a writing routine when working on the project, but that she also understood the value of flexibility when her days got complicated. “I try to keep to the routine, but I’m good if it’s not happening at the self-assigned hours, as long as I write.”

Dani says one of the best pieces of advice she received was to write a shitty first draft. “To me, that means that I’ve barfed everything I want to say, and then the real work begins.…discipline is essential. I put the blinders on and go off the grid. All I say to family and friends is that I’m going under, and I’ll be in touch when I resurface. Inspiration is great, but I don’t wait for it. I know that if I put my ass in my bungee chair—best chair ever—and keep my fingers tapping the keys, inspiration usually finds me.” She adds, however, that she believes each writer has to find the style and system that works for them.

As for her journey toward fame, Dani, ever looking to make people smile, says her first headshot was her mug shot taken after getting arrested for tagging in the suburban New York town where she grew up, and that she’s been trying to reclaim those glory days ever since. That journey has led to her words appearing in publications like Pilates Style Magazine, HuffPost, Stepmom Magazine and Hollywood Journal.

Currently, Dani notes, she is putting the finishing touches on a television adaptation of her book, and has a second book in the simmering stage.