Toward That Which Is Beautiful 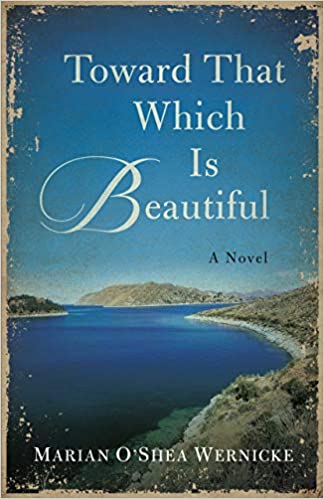 Marian O’Shea Wernicke’s debut novel, “Toward That Which Is Beautiful,” is a stunning journey of trust, suspense, and agape love.

The story is set in the highlands of Peru in the summer of 1964. Kate leaves her Catholic education, middle-class suburbia life, joins the Dominican Order, and finds herself in an unfamiliar culture with a shaky hold on the language she tries to teach in their mission school. As Sister Mary Katherine, she’s a young American novice nun who still feels like Kate beneath the long white habit and black veil of the Dominicans.

Kate is conflicted and doubts her decision to become a nun. Her situation becomes even more complicated when she falls in love with a charismatic rebel Irish priest, Father Tom, who also works in their mission area. It leads Kate to make a reckless decision.

After only a few months at the mission, Kate flees the convent. She naively walks out the door with no money, no food, no jacket for the cool nights and no destination, trusting God to protect her. She walks until she can walk no more. Yet, her simple faith proves to be all she needs, though not without travails.

Her first night alone, a light in the darkness leads her to a British journalist who befriends her, gives her lodging and food. The next morning, he provides food and a jacket with money in the pocket to help her find what she is looking for. Later she meets two female American Peace Corps volunteers who are about her age; they are on vacation and Kate spends a few days with them. In Lima, Peru, Magdalena, a young novice who served with her at the mission convent, appears after Kate’s been stabbed, robbed and beaten. Magdalena and her family nurse Kate back to health.

Sister Mary Katherine’s wit and sense of humor make her good company, as it threads throughout this novel. I love surprise endings when reading good books. The plot abruptly changes course several times and I did not expect the surprise though very satisfactory ending. Kate feels deep guilt, which reminds me of the return of a prodigal daughter who receives nothing but understanding, kindness and joy from the other nuns.

“Toward That Which Is Beautiful” will appeal to anyone of faith or curious about the community of Novitiate Nuns. It is a coming of age story following Kate’s life from 18 through 24. The characters throughout the novel are well developed. Plot twists will keep readers turning pages. This novel brings more humanity to Catholicism than the headlining exposés we have all been privy to during the last few years.

Marian O’Shea Wernicke is the author of a memoir, “Tom O’Shea, A Twentieth Century Man: A Daughter’s Search for Her Father’s Story.” She is also co-editor with Herta Feely of a collection of short stories and memoirs called “‘Confessions: Fact or Fiction?” A professor of English for twenty-five years at Pensacola State College, Wernicke served as department head of English and Communications. As a nun for eleven years Wernicke taught in St. Louis and in Lima, Peru. Married and the mother of three grown children, she and her husband now live in Austin, Texas.