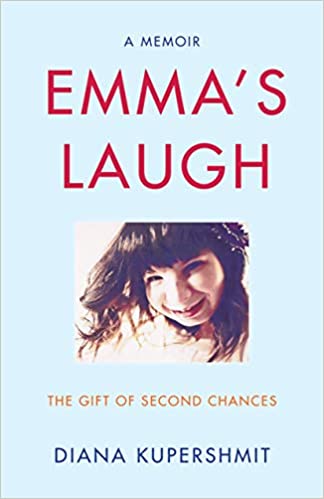 Diana Kupershmit’s moving memoir about raising their special needs daughter is heartfelt and deeply personal. Emma was born with the translocation of the second and fourth chromosomes, a chromosomal abnormality so rare that there was nothing to research, for either the family or the health care professionals.

Initially, after much thought and trepidation, Diane and her husband Tolya decided to give Emma up for adoption, as they were unsure of their ability to be good parents to a child with so many problems. These included a feeding tube, a vesicostomy to correct frequent urinary tract infections, lung and breathing problems, and constantly being with her and attuned to any change in her sounds or actions. Emma had to be in the hospital for several months before she could go home with the adoptive family. Tolya and both sets of grandparents (who lived nearby) visited Emma with her adoptive family. As it turned out, the adoptive family, already with four special needs children, could not keep Emma. Diana and Tolya got their second chance, for which they were immensely grateful. It was a huge lifestyle change but now they were willing to make it. The whole extended family became involved with Emma’s care and the care of two younger children (all within five years of each other).

Emma responded to music of all sorts so there was almost always at least the sound track of a musical in the house; the music was calming to her. Her laugh was very unique in the way that she doubled over; discovering this was so helpful and was one of the positive ways in which the family and caregivers knew that she knew what was happening. Emma was able to respond to others’ voices though she was not able to talk. All with whom she came in contact learned how she communicated and at some level they did communicate.

Emma died shortly before her nineteenth birthday; her passing left a huge hole in the lives of all with whom she had come in contact. Diana and Tolya (especially Diana) struggled with decisions about Emma and her care. But they were able to be positive and make a full life for the family. These experiences—told in the voice of one who has lived through it—will be a beacon to others facing a similar situation.

Diana Kupershmit holds a Master of Social Work degree and works for the Department of Health in the Early Intervention program, a federal entitlement program servicing children birth to three with developmental delays and disabilities. She has published online in the Huffington Post, Mutha Magazine, Manifest Station, Power of Moms, Motherwell Magazine, Her View From Home, and Still Standing Magazine. On the weekends, she indulges her creative passion working as a portrait photographer specializing in newborn, family, maternity, and event photography. She lives in New York City with her family.